I talked to a guy in Detroit last night and this was a story he gave me on the kart about its FM promotional origin. New Information on the Vintage Monza SS Chevy Jr. Go CartI have recently spoke to someone who saw one of these Chevy Jr. go  carts growing up in Michigan and this is His story. He stated that his friend down the street had one of these go carts, a white one. His friend's father worked in General Motors Public Relations/Promotions Department/Area. He stated that you could get one of these Chevy Jr. go cart's only at the Detroit Auto Show but not the Autorama (I didn't know the difference between the two shows myself). He said at that show they had an orange cart like mine on a pedestal. The Monza SS go cart was a giveaway to whoever attended the show in entered their name in the drawing box. He wanted his dad to get him one of these go carts and they looked for months trying to buy one. He stated they even checked with Tecumseh who made the engines but they could not help them. He told me these Chevy Jr. go cart's were for promotions and giveaways only and made specifically for General Motors.**another interesting note about his friend down the street, his friend was kind of hard on the vehicle and I'm a couple of occasions a plain unmarked step van would pull up to his friend's house and exchange a new Chevy Jr. go cart for the one that was possibly having mechanical problems. I do not know how true all this story is but he is trying to help me do a little more research on the Monza SS Chevy Jr. go cart origin and this is his best recollection at this time.

Hopefully he can get in touch with his old friends father and find out what he knows about the kart.

Hi Bob, Well here is the rest of the history of the Monza SS Chevy Jr. from a staff historian at the Corvair Society. Now if we are ever asked we should know about everything there is to know. - Dale They were built by Rupp in Ohio on a fairly "stock" Dart Kart chassis, with the specialMonza SS-replica bodies attached.They were initially made just for Chevrolet to give away at auto shows, travelling Chevy shopping center shows, Chevy exhibits at fairs, etc and even at Joie Chitwood thrill shows (a kart was used by clowns in theiract, too). Later on, Rupp sold some on their own, and Chevy dealers could buy them for their own contests. Between 1965 & 1975, they were given away at ALL kinds of auto shows & fairs, not just the Detroit show. From 1965-67 they were called Monza Juniors (Monza Jr) and were red. From 1968 to approx. 1971 (I don't have my notes with me), the name was changed to Chevy Jr, a white stripe was added to the nose,and the color changed to a red-orange. After that, the color changed to blue. Some were painted white and used at "Safetyville" in Flint, which was sort of a miniature town for driver training. 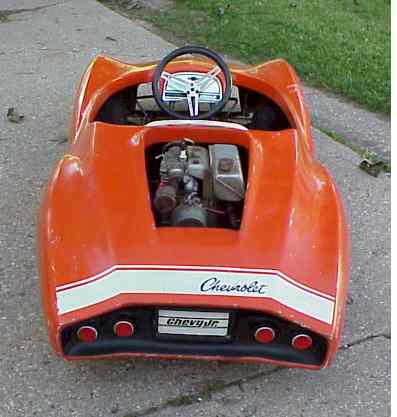 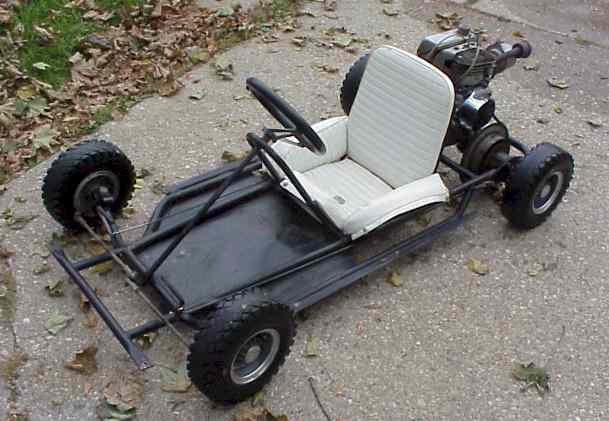